A dripping sound coming from a leaking shower head is not only annoying, but can also cost you money. An emergency plumber in Coto de Caza can solve this problem quickly and easily before it escalates. Even though it’s not as serious as a clogged main drain, it is the second largest waste of water in your home after a running toilet. But why did the leaking start in the first place and how can your stop it?

Why is my shower head dripping water?

There are multiple reasons why a shower head could be leaking when it’s not in use and here are the most common ones.

Every shower head has water holes which can become clogged due to mineral buildup. When that happens, water finds other ways and can begin to leak from the top of the face plate or between the pipe and handle. Fixing it is different than unclogging a sink, but it’s just as easy.

Every shower has seals made from specific rings which are meant to prevent leaks. Over time, the seals can break or become hardened so they need to be replaced to stop leakage.

Showers with two separate temperature handles have compression faucets behind each. They are each connected to a seal which can break and cause water to leak. To find out which one is defective, see if the leaking water is hot or cold.

How do you fix a leaking shower head?

After the cause of leakage has been determined, it’s time to fix the problem. Here’s what the pros can do about it.

Shut off the water supply and turn the shower head counterclockwise until it comes off. If you find mineral deposits clogging it, soak the whole head in white vinegar and let it sit for six to eight hours. Afterwards, brush it clean and put the head back on.

In older showers, washers and rings can deteriorate so they need to be replaced. First, unscrew the faucet handle and disassemble it to find the screw. Remove it and replace the worn rubber washer with a new one.

This is the part which diverts water from the faucet to the shower head and there are two types of it. If it’s a lever, you need to remove the faucet handle, disassemble the valve and replace the diverter valve or the entire assembly. If it’s on the faucet, unscrew the plate under the faucet to get at the valve. 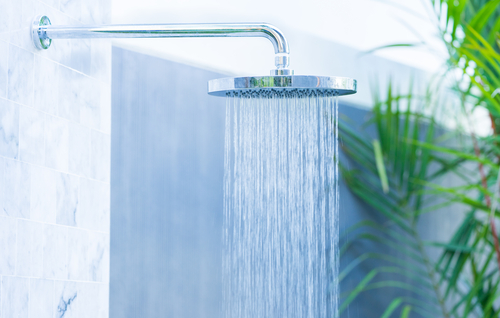 Many things can go wrong with the plumbing in your house and a leaking shower head is just one of them. Imagine getting back from Thomas F. Riley Wilderness Park and hearing that annoying dripping sound. No need to worry, just call Emergency Home Solutions.

We have over 15 years of experience in dealing with all types of home plumbing issues. With all the necessary tools and know-how, we guarantee the problem will be solved in no time and you can go back to all your daily activities. As the number one plumbing service provider in Coto de Caza, we will provide tailor-made solutions for the problem you are facing. Call us today for an intervention.